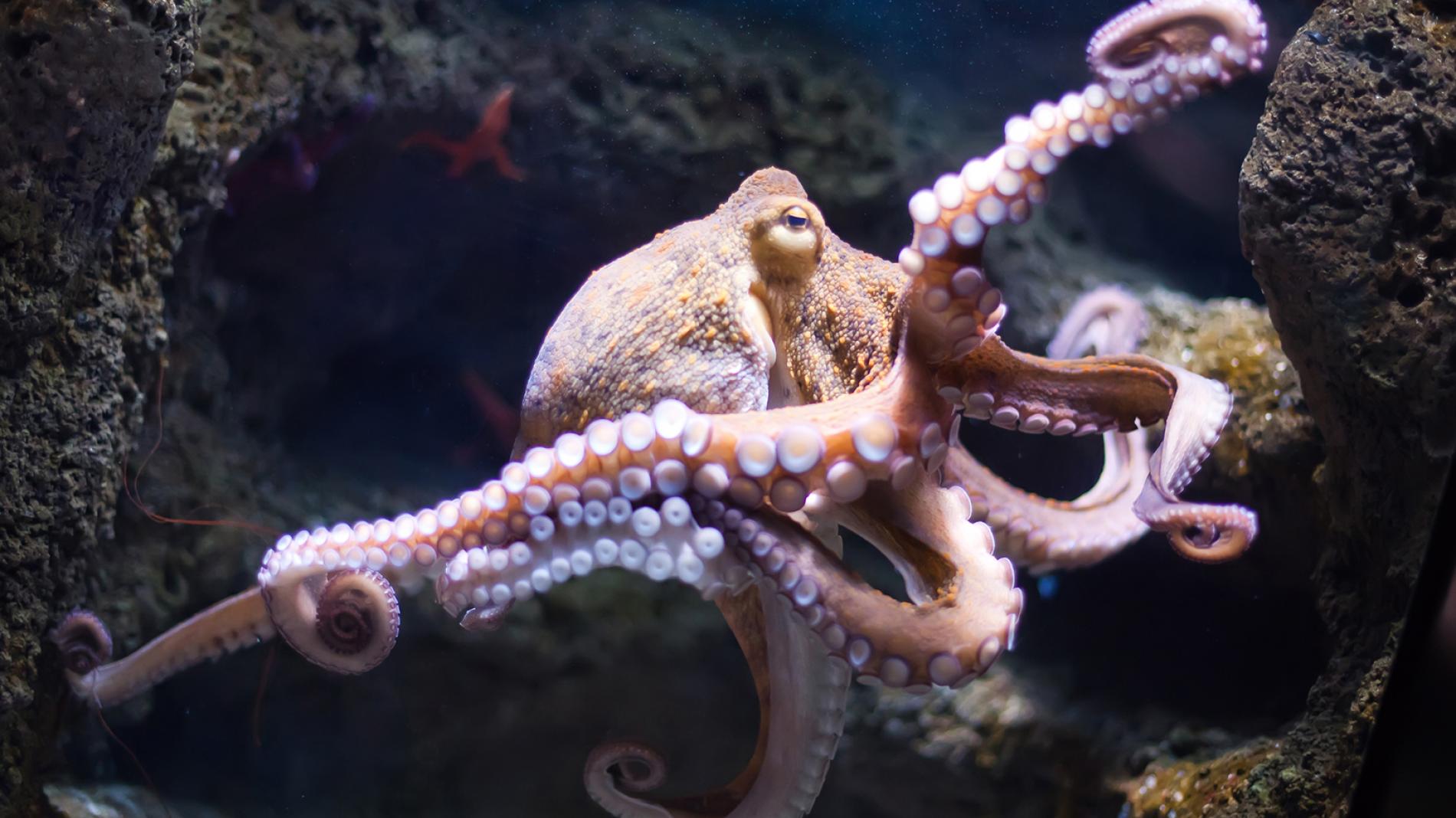 Octopus Facts for kids, what do octopus eat and where they live in our ocean. The Pacific octopus grows larger and lives longer than any other octopus species in the Ocean. The record size for the North Pacific octopus has reached 30 feet in length ( 9.1 meters ) in length and weighed more then 600 pounds ( 272 kilograms).

The life span is to be around four years old, with both males and females dying soon after reproduction. (breeding). Females do live long enough to tend to their eggs but they do not eat during the month long brooding period, and die soon after. This Octopus is known as a sea giant and have huge bulbous heads and generally are reddish or brown color. This octopus uses special pigment cells in their skin to change colors and textures, to help blend in to patterned corals plants, and rocks.

They hunt at night, surviving on tasty lobsters, shrimp, clams, and fish and are also known to attack and eat sharks as well as birds, using a powerful sharp, beak like mouths that puncture and tear flesh. The beak that has a position the octopus uses to attack its pray. The poison is deadly to animals but not so much to humans.

Highly intelligent creatures, Pacific octopuses have learned to open jars, mimic other octopuses, and solve mazes in lab tests. Their population numbers are unknown, and they do not currently appear on any lists of endangered or vulnerable animals. However, they are sensitive to environmental conditions and may be suffering from high pollution levels in their range.

Fisheries and By catch
Most North Pacific Octopuses are caught incidentally in trawl, longline, and pot fisheries. Pacific cod fisheries, especially those using pot gear, account for 90% of total octopus bycatch, which makes this species the most accidental caught while fishing with pods in the North West. NOAA:

Life History: Giant Pacific octopuses are solitary animals.  Only near the end of their 3-6 year life span will they seek out a mate.  The male passes a spermatophore into the female’s mantle during mating.  The female has up to 6 months to use it to fertilize her eggs.   Up to 100,000 eggs are laid in long, braided strands and attached to the roof of a well protected cave.

The female will stay with the eggs, guarding them from predators and keeping them clean and aerated for the 6-12 months it will take them to hatch.  She will not feed during this time.  When the eggs hatch the young octopus are about the size of a grain of rice and planktonic, floating near the ocean surface.  It is not well documented how long they remain in this stage before settling out on the ocean floor and assuming a more octopus-like appearance.
​Other Sources: Wikipedia NOAA  about the Giant Pacific Octopus:

Where Do Octopus Live

Octopuses live in all five oceans, some living in reefs, caves, or attached to rocks near the waters surface. Some Octopus species lives on the Ocean floor but still in shallow waters. The common octopus is found in tropical waters like in the Mediterranean Sea and East Atlantic. Read more Octopus facts for kids:

There are over 300 octopus species in the ocean. Octopi are fascinating sea creatures. For example, these amazing creatures can camouflage their skin, regrow a lost leg, and both swim in the water and walk on land!

Ranging in size from less than an inch to over 30 feet long, these highly intelligent creatures have been swimming through the world’s oceans for millenia. Unfortunately, as pollution increases and the seas fill with industry boats and garbage, all octopi are negatively affected.

Effects of Pollution
Scientists study the rising levels of ocean pollution. As a result, they discovered that the lowered levels of oxygen significantly impact octopi’s vision. While some species are affected by seeing less details, other species go blind.

This vision impairment impacts the octopus’s ability to hunt, evade predators, and mate. Luckily, these changes are not permanent. Researchers found that if the oxygen levels returned to normal, the octopi’s vision did as  well.

Another serious problem is noise pollution! Commercial fishing, offshore ocean drilling, and sea shipping are increasing. As a result, the amount of racket under the surface impacts octopi’s ability to hear, balance, and locate their position in the water.

Their statocyst (ear drum) are severely damaged due to high levels of man-made sound underwater. Consequently, octopi are unable to balance or find their position in the water. In addition, their ability to hide from predators, seek their own food, or locate home decreases.

There have been increasing numbers of cases of stranded octopi who swim away from their natural hunting area and become lost in shallower water. Subsequently, they are being found by the wrong creatures or by human boats.

What can you do to help?
Want to help? The best way to start is by supporting small, family run fisheries. Smaller boats make less noise, use less fuel and therefore have a smaller impact on the habitat of these wonderful creatures.

Another great way to help is to be aware of where your seafood is sourced. While most of us aren’t in the business of commercial fishing, knowing who and where our seafood comes from helps us keep those companies accountable to sustainable and environmentally friendly business practices.

The short life span has made it difficult for research studying the Giant Pacific Octopuses, however scientist think their populations are stable and numbers are growing. Octopuses living in Captivity becomes relatively short life span and as little as six months. The giant Pacific octopus, is one of two largest species of octopus, may live for as much as five years however all animals live longer in their own environments.

The Giant Pacific Octopus Habitat that they inhabit is the Northern Pacific Waters and prefer water temperatures of 60 degrees or cooler. The region octopuses live in stretches from southern California to Alaska’s Coast. Their habitat travels all the way down to the tail of Aleutian Islands and west, to Japan’s Coast, then down to Korea.

Lowering Plastic Pollution the ocean will save most all marine animals and the octopus is being effected greatly by floating derbies that truly are not the food that should be consumed by our marine wildlife and will have huge effects or event death to most marine animals that are forced to consume so much plastic in their diets. Make a one time donation to help save the Giant Pacific Octopus:

What Do Octopus Eat

Octopuses eat mainly bottom-dwelling crustaceans, polychaete worms, molluscs, and clams. In the open ocean octopuses eat mainly prawns, fish and other cephalopods and all octopuses are carnivores that eat meat and all have beaks that tear apart their prey. Ocean plastic and microplastics are harming our fish and waters. Learn how you can help protect our Ocean with Ocean Blue a nonprofit removing microplastics from the Ocean.