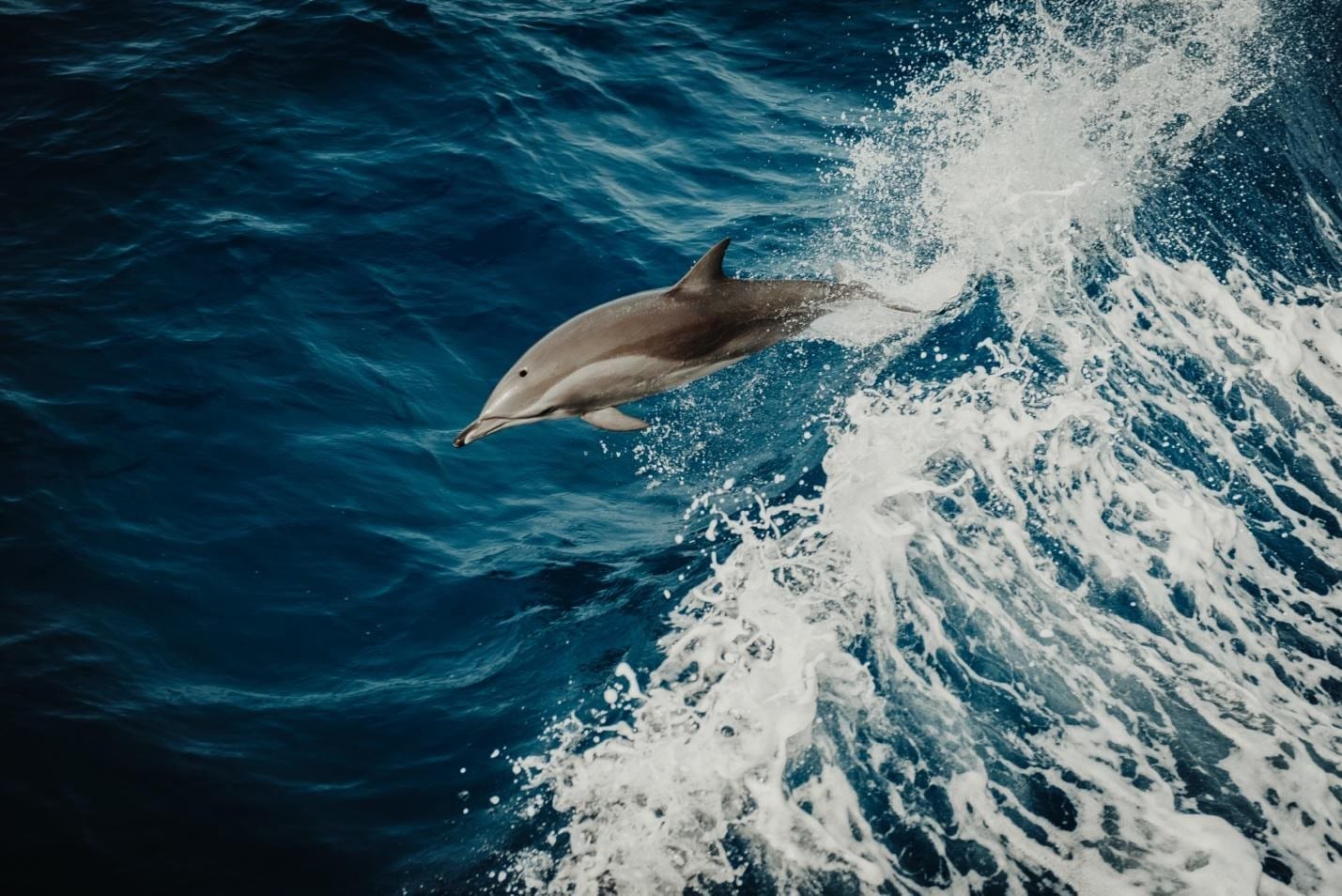 Dolphins are considered by many to be our mysterious cousins of the ocean.

The depth of their intelligence is hard to fully quantify, and we will explore more on their brains, language and emotional behavior but one thing is pretty much universally agreed: Dolphins are magnificent, beautiful creatures that are a joy to behold.

Dolphins Come in Many Shapes and Sizes

Most of us are familiar with the common bottlenose dolphin but there are a huge variety of species of dolphin that live in both salt and fresh waters.

On the other end of the scale is the rare and endangered Maui dolphin that is only found on the coasts of New Zealand – not Hawaii as the name might make you think. The confusing naming continues! The Maui dolphin is only 5 feet in length, and they have distinctive and unique black markings on the side of their face, fins and tails. There may be only 50 of these beautiful animals left in the world. (see picture)

Resource: How to Help Save the Maui Dolphins

Most of us picture bottlenose dolphins gracefully springing from the ocean with the sun setting in the background. However, there are many species of dolphin that live in rivers all across the globe.

In fact, there are 4 different species of freshwater dolphin in the Amazon river alone that are only found there! There are also other species of river dolphin found in Bolivia, Venezuela, The Ganges (India and Nepal), The Mekong and Yangtze (Asia) to name a few.

River dolphins are often considered the canaries in the coal mine for river health. If the population of dolphins in a particular waterway start to decline or exhibit other health issues it is an early alarm that the river itself is suffering in some way.

Dolphins are Mammals, not Fish

Dolphins like their cousins, porpoises and whales are mammals and not fish. This means they are warm blooded and give birth to live born offspring. It also means they cannot breathe underwater through gills, instead they have to rise to the surface to take in air. They can actually use their blow holes like a nose to inhale air and they will float at the surface and sometimes swim slowly on the surface, usually together, in order to sleep. This sleep though is more like a nap as they are in motion and have to keep their blowholes activated to take in air. They do this by only switching off one side of their brain at a time to rest and stay alert for predators and drowning.

Dolphin brains do not signal the need to breathe until much longer than humans as their bodies have a much greater tolerance for carbon dioxide. They are able to do this as they can take in bigger quantities of air and they have adapted to send the oxygen to areas that are most critical, and they don’t trigger secondary functions until they are at the surface with an abundance of air. They are able to hold their breath underwater for as long as 15 minutes in some species so they can deep dive and catch fish to eat.

Dolphins live in groups called pods or sometimes herds. These pods are usually around 5-25 dolphins and occasionally pods will cluster together for periods of times and these are call super pods! Dolphins do not seem to stay in pairings and usually the mothers (cows) will only take care of the offspring. There are known examples of males (bulls) stepping in to help but in general males seem to bond together with other males, more than the females who just focus on their young. Dolphins usually have one calf at a time and the gestation period of the pregnancy is anywhere from 9-15 months!

Once the calf is born their mothers feed them with milk, another mammal trait. The calves of bottlenose dolphins (the most common and familiar dolphin,) are usually between 30-40 pounds and 3-4 feet long at birth. They raise their offspring, with the help of others, mostly females, in the pod until they are 4-6 years old and ready to fend for themselves. They will then leave that pod and explore, but they will occasionally return to visit their mothers, aw.

Dolphins dine on an array of different things dependent on what is around, so they are opportunists of sorts. Dolphins will eat fish, squid, crustaceans and so on. Dolphins will also work in teams to surround schools of fish and pick them off one at a time. Although they have teeth, they often eat their prey whole. An average male dolphin weighs close to 400 pounds and they will try to eat at least 20 pounds of food a day!

The big exception to this feeding rule is the orca who will prey on much larger animals both mammals, fish and birds. Killer whales have been known to eat seals, penguins, sea lions, birds, fish and squid, sharks and even other whales!

It has been thought that intelligence of an animal was directly proportional to the size of the brain in ratio to the body. This is often discussed in the evolution of humans. Although there are some conflicting arguments on this, but we do know that dolphins have brains that are 5 x larger than the norm for animals of their size. For a point of reference humans have a brain 7 x larger. This means the dolphin is the animal closest to humans in terms of the power and abilities of the brain.

Measuring intelligence is not easy and it is made much more difficult when comparing land and sea creatures. Some of the similarities to look for in “intelligent creatures” is that they seem to share commonalities such as living a long life, having communities that are flexible and adaptive, and needing their parents to survive their early years.

This topic can get quite complex and as of yet there are no complete understandings of all that dolphins do to communicate. Dolphins are known to use high pitched vocalizations to signal to their pods of a variety of different things from distress, pleasure, and for location. These sounds are often particular to the pods themselves who are creating their own version of these sounds. Also, each individual dolphin creates their own distinctive whistle in order, we think, to identify itself. Dolphins also use all kinds of other kinds of communication such as visual, chemical, audible, touch, smell and echolocation.

As of yet there is no proof that dolphins are communicating at the level of humans to share stories or history or something of that depth. However there is plenty to suggest these incredible creatures are smarter than we think. They are able to perform behavioral mimicry which is how they are taught at the water parks which we hope will no longer occur. Behavioral mimicry is unusual but also shown in animals such as dogs and chimpanzees. Dolphins alone though have shown they can mimic from television prompts and to recognize themselves in a mirror.

There is so much more to learn and understand about these wonderful creatures. Dolphins are one of the most social and playful animals we know of. We do not know why but you will often see dolphins playing, flipping, spinning and doing back flips together, riding waves and boat bow waves. They even play with objects from the ocean like shells and corals, throwing them back and forth with one another and even playfully chasing each other for no other reason than simple fun!

This play seems to be at the very heart of these communities of dolphins and just adds intrigue to the unknowns still surrounding them and the power of their communication.

Here is a great video to see a bit deeper into this subject:

We think these beautiful creatures are just fascinating and there is so much more to learn about them which is very exciting. Have you ever swam with dolphins? Have you ever seen a river dolphin? Let us know in the comments about your favorite dolphin experience or a dolphin fact that you think is cool.

There are many issues facing dolphins and in our next blog on Dolphins we will discuss those and how you can help!