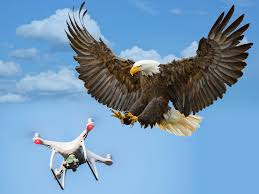 Eagle Fights Back After Being Harassment

Wildlife fights back after being harassed by a drone owned by the State of Michigan. The attack took place near Escanaba, Michigan, and the drone was dropped in lake Michigan by a local native Eagle. The drone was 162 feet above the waters of lake Michigan and today this drone is just a added gift of more pollution laying at the bottom of lack Michigan.

The pilot of the drone was Hunter King of the Michigan Department of Environment of the Great Lakes, and Energy. King was mapping shoreline erosion and had only completed seven minutes of flight time when he began having problems with reception and he had to press the return home button in hope the drone would return for a safe landing. The drone was returning home and suddenly, the speed of 22 mph dropped to 10 mph. King was being bombarded with warning messages, and king spotted the eagle flying away. King spent a few hours searching for broken parts and never removed this said drone from the waters.

As research shows with documented studies that drones can change behaviors of animals near close proximity to drone flights and with this said we still have State governments flying away.