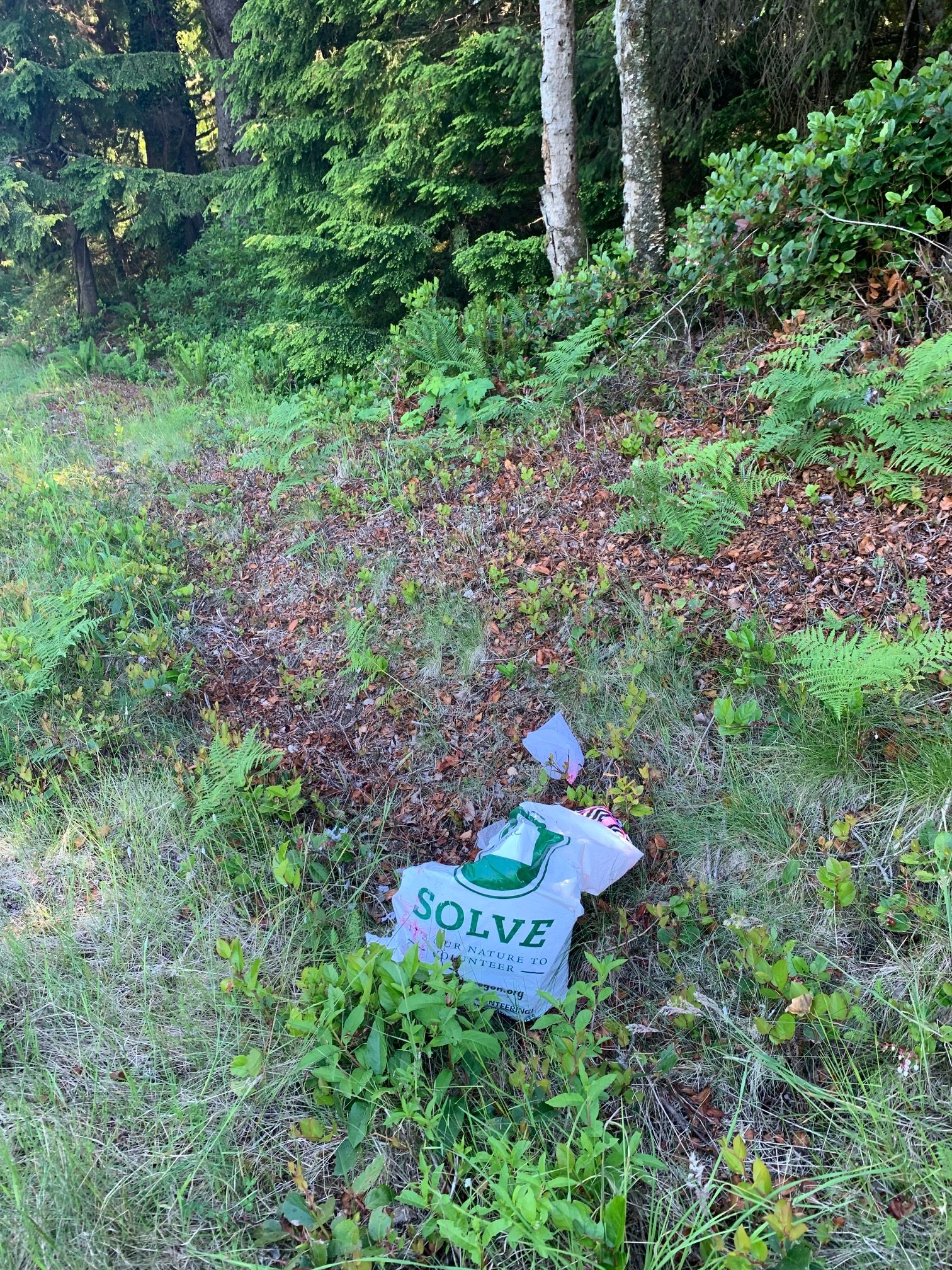 SOLVE Oregon, a nonprofit focused on beach cleanups and ecology restoration, is part of the problem, distributing plastic bags for beach cleanup projects.

There are plenty of viable alternatives to plastic bags for beach cleanup projects. Will you raise your voice with us to encourage SOLVE Oregon to ditch plastic bags at their cleanups and commit to a more sustainable method of trash collection?

Who is SOLVE Oregon?

SOLVE Oregon’s mission is “to bring Oregonians together to improve our environment and build a legacy of stewardship.” Founded in 1969 by Oregon state Governor and environmental justice leader, Tom McCall, the organization cleans litter from natural areas around the state and reintroduces native greenery to support local ecosystems. They rely on SOLVE Oregon volunteers and generous partner donations to further their mission.

However, their continued use of plastic bags at litter and beach cleanups needs to stop. Ocean Blue Project volunteers continue to pick up SOLVE Oregon branded plastic bags on beaches and alongside highways to this day. We’ve had direct conversations about this with leaders from the organization, pleading with them to consider retiring the use of plastic bags in their operations. We were told they had a plan in place and were taking steps towards more sustainable cleanups. Yet, we continue to clean up their bags across the state of Oregon. We collected one along the highway as recently as last week.

What alternatives are there? How does the Ocean Blue Project collect litter and marine debris? 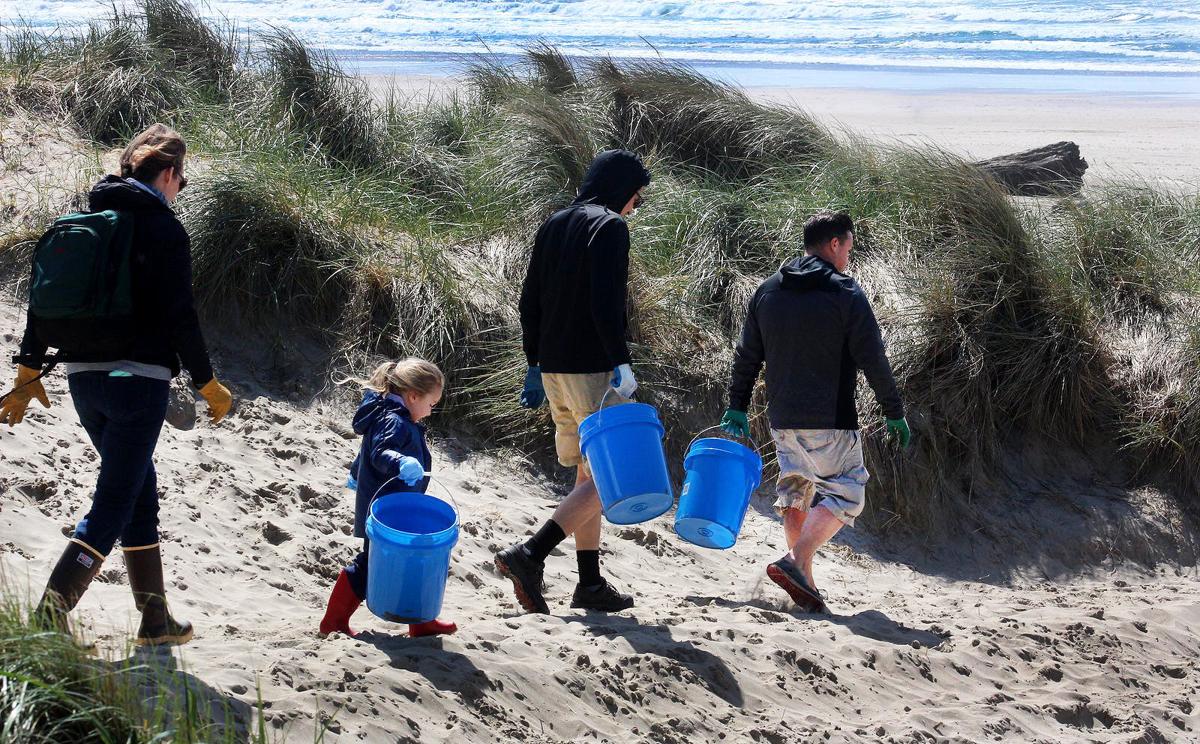 The buckets and burlap sacks we use to collect litter are emptied, washed and placed outside to dry after every cleanup project, ensuring no additional plastics make their way onto the beach or into the water. This waste is then sorted and stored in a warehouse, away from landfills, waiting to be recycled.

Our volunteers are well informed about our plastic-free cleanup methods, so you can imagine how they felt when we partnered with SOLVE Oregon on a cleanup in our early days and they sent a box of plastic bags without asking. They were disgusted. If we distributed plastic bags at all of our projects since 2012, we would have used and disposed of 53,000 bags by now.

The founder of SOLVE Oregon was photographed using burlap bags himself at beach cleanups! We want to see SOLVE Oregon reconnect with their roots, approaching environmental problems holistically as they once did.

Why should plastic bags be banned at cleanups?

The Environmental Protection Agency’s FAQ page on recycling says it best, “the most effective way to reduce waste, and the most environmentally preferred strategy, is to not create it in the first place.”

This isn’t complicated to understand. The Ocean Blue Project and SOLVE Oregon both exist to keep plastic out of Oregon’s natural ecosystems and put simply, the most effective way to do that is by refusing to use plastic bags as part of cleanups.

However, reversing a decision to rely heavily on cheap disposable bags is more complex when considering the tradeoffs between operating expenses and nonprofit funding sources from an organizational perspective. Plastic bags are lightweight, inexpensive, and easy to ship. Plus, they can be branded with logos for a variety of marketing purposes.

SOLVE Oregon is perceived as a leader in environmental efforts and as such, they need to be held accountable for their actions. Their director is paid____ They could start by diverting part of those funds paid to their director (average non profit director salary, salary paid) and instead invest in a blue economy less dependent on plastics and a circular economy less reliant on virgin plastics.

How much plastic does SOLVE Oregon introduce into the environment?

We can do a bit of easy math using data from the SOLVE website, starting with figures from their sustainability page. The most prominent statistic on that page points to their annual volunteer participation rate: an estimated 30,000 SOLVE volunteers are organized across 900 cleanup projects every year.

SOLVE says efforts are being made to reduce the number of disposable supplies they distribute by encouraging folks to bring their own gloves and buckets to cleanup projects.

However, even if we were optimistic in assuming 50% of SOLVE Oregon projects were successful in convincing volunteers to use buckets (instead of disposable bags that become marine debris), that leaves at least 15,000 volunteers sending one or more bags of thick plastic per year to local landfills after cleanup projects.

These recycled bags are heavier than your typical kitchen bag. A thousand of these heavy recycled plastic litter bags weigh about 50 pounds. So if every SOLVE Oregon volunteer from the last twelve months used one of these bags while volunteering, they would have dumped an additional 1500 pounds of plastic into landfills as a result of SOLVE’s “cleanup” projects.

SOLVE Oregon seems to be proud that the bags used during their cleanups are made with 60% recycled plastics. Recycled or not, plastic takes 1000 years to break down and even then, never full biodegrades. It’s statistics like these that inspire us to do this cleanup work in the first place. Why introduce hurdles to a problem you’re trying to solve?

Ok, I’m convinced it’s ridiculous to use plastic to clean up plastic, why are they so reluctant to give up their plastic bags?

When the issue is viewed from a business lens, it’s almost understandable. Swapping materials from disposables to reusables is undoubtedly an increased operating expense. Burlap sacks are objectively more expensive to order and distribute than plastic bags.

In addition, the ability to offer branded plastic bags to donors for their logos to be widely distributed across the state as sponsors is an attractive selling point for funding. We know funding non profit work requires creativity sometimes! However, there’s no reason donor logos couldn’t also be placed onto burlap sacks or bins used at cleanups.

SOLVE Oregon’s continued negligence threatens their credibility as an organization committed to sustainability. It’s clear that the added cost of swapping out materials has significant worth in keeping SOLVE Oregon true to their mission and capable of creating a real impact in the state of Oregon rather than contributing to the problem.

I’m concerned about SOLVE Oregon’s plastic bag use but I’m planning to volunteer with them in the near future, should I cancel?

Absolutely not! Maybe just bring a bucket instead of using their disposable bags. Also, see if you can find time to share your concerns with your volunteer coordinator or group lead. Let them know you appreciate the work they’re doing (we certainly do) but that changes need to be made. We’re stronger together, especially if we can keep each other honest.

You can also add your name to the petition linked below and at the top of the page to let SOLVE Oregon know there are many of us who are invested in seeing change.