Why You Should Think About the Fishies 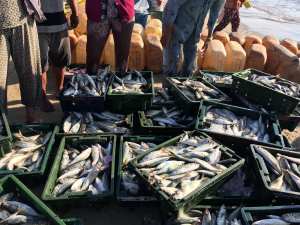 Do you love seafood? Most Americans do! About 80% of the U.S. population has eaten seafood in the last month. Fish and shellfish are important parts of a healthy diet. Studies have shown eating seafood can mitigate cardiovascular risk. Seafood also provides important nutrients for brain health in developing children and adults. The U.S. Department of Health and Human Services recommends that we eat about half a pound of seafood per week

Americans aren’t the only ones who love seafood. About 3 billion people worldwide depend on it for their main protein source. Worldwide, over 775 million people get their livelihoods from marine ecosystems. Humans depend on marine life for nutrition, economics, culture, and coastal protection.

Seafood isn’t the only reason to care about fish populations. Even if you don’t eat seafood, you should care about the health of global marine life. Changes in fish populations reflect the whole of our planet and point to our future as well.

So it’s alarming that the numbers of ocean fish have declined by 50% since the 1970s. And the fish left aren’t doing well, marked by plastic and pollutant ingestion. Globally, fish populations are polluted with industrial and agricultural contaminants.

Where Have All The Fish Gone? 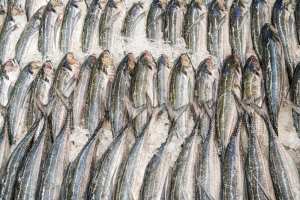 We affect our oceans in so many ways. Here are the main reasons human activity has hurt fish populations worldwide:

Most of us are aware of the threat of climate change, but did you know our oceans are trying to protect us from it? Oceans serve as a sponge for carbon dioxide (CO2), which is a driver for climate change and warming. Without this protective action, we would see more drastic effects from fossil fuels. In 2017, the ocean absorbed 2.6 billion tons of carbon resulting from human action. This was over a third higher than the average amount absorbed in the decade before.

But this protective action comes at a cost to our oceans. CO2 absorption causes decreases in pH, making our oceans acidic. This affects marine ecosystems on a massive scale. We are changing the chemical makeup of our global seas. In the last 200 years, the ocean has grown 30% more acidic.

You probably aren’t surprised to learn that increasing acidity hurts marine life. What if your house started to dissolve around you? That’s what some animals experience as their shells dissolve in acidic seawater. The same effect happens on reefs. Acid leeches away calcium and new growth slows.

Across fish species, acidification alters physiology, behavior, and development. Species studies have shown that decreases in pH affect marine life in different ways. Scientists are in agreement that ocean acidification is bad for each of us.

We don’t think of water as having oxygen, but like us, fish depend on it for survival. Loss of oxygen concentration leads to decreases in biodiversity, productivity, and biogeochemical cycles. Individual animals need oxygen to live, and global cycles must have it as well.

Since the 1950s, oxygen levels have been declining worldwide. As global temperatures rise, surface water absorbs less oxygen. Eutrophication caused by waste dumping also leads to falling oxygen concentrations. Nutrients from shore carried to the coast end up in the ocean, causing areas of decay. These factors speed up oxygen consumption and reduce the ocean’s ability to absorb more of it. Meanwhile, the slowed rate of oxygen absorption starves marine life underwater. The food chain gets weaker as a whole.

The result of deoxygenation is “dead zones” in our ocean. These are vast areas where marine life cannot survive. Areas like this are already present in the Indian, Pacific and Atlantic oceans. The volume of Dead Zones has quadrupled since the 60s. Some models predict widespread ocean deoxygenation could occur by 2030 and 2040.

Have you ever over-spent? Think of the world’s ocean as a bank account, and our balance is negative. The UN Food and Agriculture Organization states that over half of fish are fully exploited. Almost 20% of fish get overexploited and another 20% are moderately exploited. Some estimate that global fish populations are half of what they were only 40 years ago. With numbers like these, it’s a wonder we still see fish in our ocean at all.

Overfishing doesn’t only hurt the fish on our table. Decline in the number of fish in a species hurts the species as a whole, and weakens it’s reserve. This puts more pressure on the remaining population and weakens their ecosystem too.

By-products of fishing hurt the ocean also. Fishing gear scrapes up reefs and destroys important habitats. Nets are non-specific, and often species that aren’t targeted get tangled and caught in them. Seals and other mammals often drown in discarded fishing nets. The FAO estimates that we’ve lost a third of fish stocks because of overfishing and habitat loss. Academic estimates are even more discouraging.

One thing is clear; ending overfishing can strengthen our ocean as a whole. Fish populations could replenish themselves without the constant onslaught of overfishing. Marine life as a whole can become more resilient to climate change. Two main strategies have emerged to mitigate overfishing. These include closer fisheries management and creating designated marine reserves.

Pollution takes many forms. Plastic, agricultural run-off, chemical waste, and greenhouse emissions are all human contaminants. It is difficult to isolate the effects of one of these, but plastic is a very visual form of human pollution.

100,000 marine animals get found tangled in plastic every year, and that’s only the ones we find. It’s estimated that plastic alone kills 100 million marine animals yearly. When caught, 100% of turtles have plastic in them. The same study found plastic in almost 60% of whales and 36% of seals. Plastic ingestion leads to the torturous deaths of millions of animals every year. Read more about plastic in our oceans and how to help here.

Other pollutants, like DDT, pesticides, and heavy metals, are persistent toxins. That’s because they don’t disintegrate once they reach the sea, but remain for years and end up in marine life. Although illegal now since the 70s, DDT is still found in the deep ocean after 40 years. Read more about how barrel after barrel of DDT ended up on the ocean floor on our Ocean Blue Blog.

Chemical runoff from large-scale farming flows into streams and the ocean. This inadvertent dumping accounts for algae blooms, deoxygenation, and dead zones. Rain washes other chemicals into streams, where they funnel to the ocean. At the same time, air pollution falls into the ocean as well.

You’ve heard about mercury in fish, but have you ever wondered how it got there? Most mercury gets into the air through fossil fuels from burning oil, coal, and natural gas. It’s also released during forest fires, manufacturing, and waste incineration. In it’s elemental form, Mercury is harmless. But it undergoes a big change when it enters our waters.

Our Waste Comes Back to Bite Us 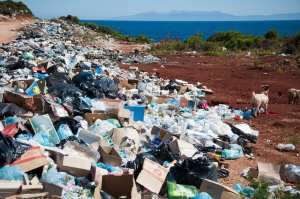 What goes around comes around, and that’s never been more true than in our oceans. The habitats and species we pollute play important parts in the food chain we rely on. From the air, mercury falls into our oceans and streams. Here, bacteria changes it into methylmercury. It is in this form that  tiny marine animals absorb it through their scales. As the food chain goes, these small fish and plankton get eaten by larger fish, and get eaten by larger fish still. This is Biomagnification. By this process the largest fish (often the ones on our tables) absorb massive amounts of mercury. Mercury binds to fish protein, so extracting it once it’s in the fish is impossible.

Mercury affects our health in many ways, and there are good reasons to be wary of it. Developing neurological systems are most vulnerable. Fetuses and young children should be protected. Concentration, exposure time, and age are important factors determining the severity of consequences. Early mercury exposure can stunt brain development. This hurts a child’s ability to learn, think, and solve problems. Public Health authorities discourage certain people from eating more than two servings of seafood per week. These include women of childbearing age, pregnant women, and women who are nursing.

But children aren’t the only victims of mercury exposure. Adults can experience tingling and numbness of the tongue, lips, fingers, and toes. Fatigue and blurred vision are other early signs of exposure. Later signs of neurological deterioration include vision, speech, and hearing loss.

Almost everyone harbors small amounts of methylmercury. The CDC states that most everyone’s blood mercury levels are too low to cause health problems. In other good news, mercury levels in the oceans have actually fallen in recent years. The bad news is that overfishing has actually caused some fish to absorb more mercury than ever. This is because a smaller population is absorbing the same amount as they did in larger numbers. Overfishing has also caused some fish to eat different prey than they usually would. These alternative sources of food can be higher in mercury. Rising ocean temperatures speed up fish metabolism. Because of this, fish eat more and absorb more mercury.

What Can We Do to Save the Fish? 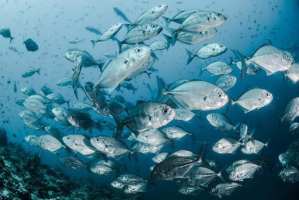 All this evidence is probably making you think you should stop eating fish entirely. But there is good news too! Some evidence shows that pollutants in fish have actually decreased in the last 30 years. The fish you eat today has about 50% of the pollutants compared to the fish your parents ate at your age.

Many countries are taking positive action. In 2018 more than 60 countries had started regulating or banning disposable plastics. You can take personal action in the fight against plastic waste too! Buy one of our Reusable Water Bottles and remove 30 pounds of plastic from our oceans!

Once plastic is in the open ocean, it is almost impossible to remove. Pick up plastic before it becomes irretrievable. You can join one of our Ocean Cleanup Projects and bring your family and friends!

Teach your kids about the ocean with our Blue Schools Program! We’ve created an exciting curriculum for you and your children. Coming in the fall, Blue Schools will include home and classroom learning. Kids will also experience outdoor field work and local community projects.

Register Ocean Blue Project under your Amazon Smile! You can remove plastic from our oceans with every eligible Amazon purchase. Every dollar donate removes 1 pound of plastic from the ocean!

We are much more aware of the effects of our actions than previous generations. The worldwide web allows us to educate ourselves, motivating us to make changes. Stay informed by following our Ocean Blue Blog.