It’s Not All About Plastic: Why the Ocean Needs Trees Now

It’s Not All About Plastic: Why the Ocean Needs Trees Now 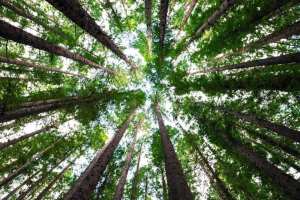 It’s common knowledge plastic is one of the biggest threats facing the ocean today.

Why don’t we talk more about the ocean’s allies?

I’m not talking about beach clean-ups, decreasing plastic use, or recycling.

Those are all great things people do to help the ocean.

The extraordinary thing about nature is it’s a self-sufficient cycle ─ IF humans let it be.

The ocean’s best friend is already out there, doing its part.

This friend is all over the world, in every country, by the coasts and inland.

I know you’ve seen at least one today.

And it’s not just large forests like the Amazon helping the ocean.

More and more the need for trees within cities is becoming critical for ocean health.

Urban trees to save the ocean? Yes, it’s true!

Before we take a closer look at how city trees work for the ocean, let’s take a step back and look at the water cycle. 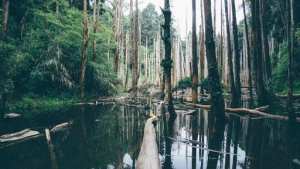 The water cycle connects all water on Earth. It’s a continuous process with no beginning and no end. But there are four distinct stages.

Condensation ─ The water vapor rises higher and higher into the sky and becomes cooler. The cooled water vapor first becomes a cloud. As it gets colder, it condenses further and becomes heavy.

Precipitation  ─  Once the condensed water vapor gets heavy enough, gravity brings the water back to Earth.

Runoff  ─  Water falls back to Earth as either rain or snow. The soil soaks up water until it can’t take in any more. This excess water goes into rivers and streams, and ultimately to the ocean.

The water cycle is crucial for the distribution of freshwater and the climate of the earth.

Where do cities fit into the water cycle? 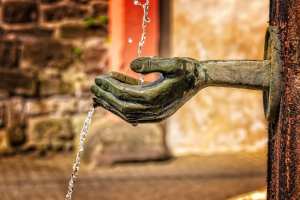 Cities have managed to insert themselves right into the heart of the water cycle.

In between precipitation and runoff, there are cities.

Rain falls down to wash the cities’ pavement. All that grit and grime goes into the runoff.

City concrete acts like a superhighway for storm runoff. Since many cities began as river settlements, it’s not a far trip to reach streams and rivers.

It’s non-stop to the ocean from there.

Cities are in a precarious position within the water cycle. Every city is a coastal town.

It’s the perfect setup for a steady stream of pollution to flow right to our oceans. 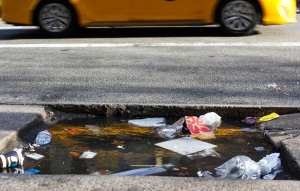 There are two main types of urban pollution particularly harmful to oceans.

Heavy rains intensify the problem. Surges of rainwater overwhelm an already overwhelmed systemLeaked waste joins runoff and goes to the nearest body of water. No matter if it’s a creek, stream or river, they all eventually connect to the ocean through the watershed system.

Our waste is getting to the ocean right now.

The Oregon Department of Environmental Quality recently identified the source of fecal contamination in Sunset Bay.

Can you guess how the contamination got to Sunset Bay?

And the fecal contamination isn’t made from Big Creek.

It’s flowing over the land from sources like failed septic systems and leaking sewage pipes. Both Big Creek and Sunset Bay are now listed as impaired waters.

Why are our sewer systems failing?

City sewer systems are old and not designed to handle the amount of waste modern populations send down the drain every day.

The cost to upgrade sewer systems is staggering. It’s also not a fast solution. Updates will take decades and costs billions.

Interception  ─  When rain falls, some lands on the leaves and branches of trees. The more tree coverage, the less rainwater reaches the ground. Trees also slow down the rain that does reach the ground. Slower rainfall leads to a slower runoff flow.

Infiltration  ─  Rainwater that does make it to the ground gets absorbed by the surrounding soil. Tree roots soak up water from that soil. More space is then left in the soil to absorb more rain. More stormwater in soil means less runoff from storm surges. Fewer storm surges mean less sewage overflow.

Transpiration  ─  Water stored in trees gets released into the atmosphere as vapor. As water moves out of trees back into the air, more water can be taken up from soil.

Even when it’s not raining, trees are hard at work.

Growing tree roots break up soil. The space created makes more room for water to move further down into the ground. Less runoff is the result.

Trees offer a natural solution to the human problem of sewage.

One tree could keep your next flush from reaching the ocean.

Human waste isn’t the only pollutant cities are sending to the ocean every day.

Think of all the different fluids needed for a car. Oil, gas, windshield wiper fluids. Any little drip from a car gets on the road. The runoff takes it to the ocean from there.

Any fertilizers, weed killers, or pesticides used on green spaces gets washed into the runoff.

Fragments of heavy metals from cars, roof shingles, and manufacturing go for a swim in the local river.

An urban stream gently flowing through a city center may look beautiful on the surface. But underneath the beauty is a shuttle of mercury, nitrites, and microplastics.

Cities are one of the biggest sources of pollution and runoff. Surfaces that can’t absorb water, like roads and rooftops, are a defining feature of cities.

Polluted urban runoff takes over the water cycle. The ocean becomes the final resting spot for this waste.

It’s a hard problem for trees to solve.

But with the help of a friend, trees are part of the solution.

Fungus, or mushrooms, naturally filter and break down pollutants and toxins. And mushrooms supercharge a tree’s ability to absorb water.

Together, trees and mushrooms form a symbiotic relationship known as mycorrhizae. In the urban environment, mycorrhizae are essential for the health of trees.

Mushrooms colonize the root system of trees. The fungus increases the surface area of tree roots. This makes it easier for trees to absorb nutrients and water.

In turn, mushrooms have a sturdy home on trees.

Partners for Ocean Clean Up 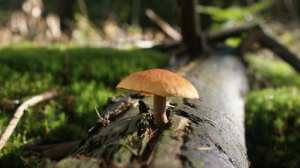 Ocean Blue Project has been embracing the natural ocean cleaning abilities of fungus and trees for years.

Along with the help of NASA, Ocean Blue studies the genetics of fungi. This research finds the best fungus to clean up urban pollutants.

When they aren’t cleaning up beaches, Ocean Blue is planting trees alongside the local community.

Through Blue Schools, Ocean Blue inspires the local community to observe nature more deeply.  When you take care of your backyard, you are taking care of the ocean.

A tree planted along the Willamette River in Oregon keeps pollutants out of the ocean. A discarded Taco Bell Cup picked up off your street keeps it out of the ocean as well.

Other advantages of trees in cities

The biggest impact of trees is in managing excess runoff from urban areas. But they do even more than that!

Plus… Trees are beautiful!

How can you help? 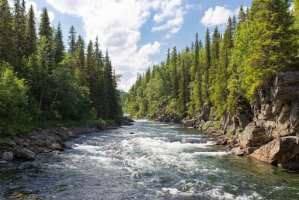 Well, the obvious answer might be to go plant trees. But not everyone has the equipment or right fungus to make that happen.

Instead, here’s a couple quick ways to spread the branches of your impact:

One World, One Ocean

Cleaning up our one world ocean is a massive undertaking. Human activities have spread the planet thin.

Appreciating and joining together with nature, we can restore the beauty of our waters.

So, next time you see a tree ─  don’t be shy about giving it a hug.

Author Bio: Claire is a copywriter living in the Twin Cities of Minnesota. She is a tree and yoga lover. She likes to spend her free time hiking along the Mississippi and St. Croix Rivers with her husband and dog.