Why Are We Cooking Our Salmon Before We Catch It?

Why Are We Cooking Our Salmon Before We Catch It? 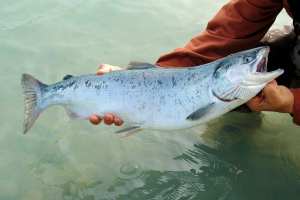 Climate change is threatening to turn our one world ocean into a giant seafood fondue.

Don’t believe me? Consider a few statistics. Over 90% of the warming that’s taken place on Earth since 1971 has occurred in the ocean. The top part of the ocean ─ approximately the first 2,300 feet or so ─ has warmed up the fastest. And that’s where most marine life lives.

Climate change affects all marine life in one way or another. But salmon ─ that ever-popular, nutritious, beautiful fish ─ is particularly threatened. Salmon is one of the top three most popular seafoods in the U.S., but its importance goes way beyond sushi and omega-3s.

Salmon is what’s called a “keystone species” ─ meaning that it’s vitally important to the health of many other species and ecosystems. And so ─ speaking of species ─ we H. sapiens are going to have to get our act together and tackle climate change. So many other living things depend on healthy salmon populations.

How does climate change affect salmon?

As we start to look at the ways that climate change threatens salmon, the size of the problem really comes into focus. Climate change affects every aspect of a salmon’s life cycle. Think about all the things that are important to your survival: food, shelter, clean air, and water. Salmon need these things too, to survive and reproduce ─ and all are being threatened by climate change. 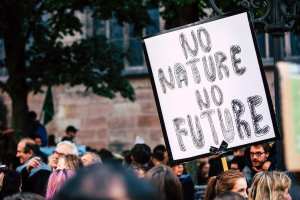 Most of the threats to salmon have to do with their ability to reproduce ─ which is pretty important for any species, right? 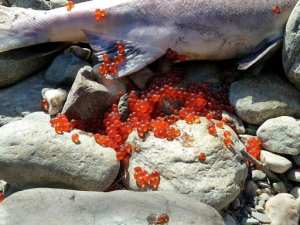 Here’s a very simplified summary: Salmon lay and fertilize their eggs inland, in the gravel beds of rivers. After the eggs hatch, the tiny fish spend a few months to a year in the river, feeding and growing.

Eventually, they head to the ocean, where they will live for 1-7 years before returning to the river where they were born. There, they lay or fertilize eggs (“spawn”) to produce the next generation of salmon, and then die.

Every single step in this process depends on the salmon’s habitat and food supply. And climate change is throwing a wrench into all of it.

A 2019 study outlines many of the problems. Because of warmer temperatures, snowmelt is happening earlier in the year. This means that, by summertime and fall, there is less water flowing in the rivers when salmon swim upstream to spawn. Low water levels make the salmon’s already difficult  journey harder, or even impossible. 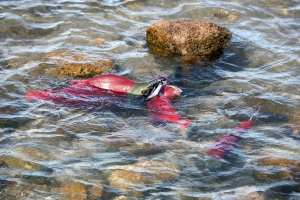 Flooding is also occurring more often due to climate change. It can wash away eggs and tiny fish from their nests.

Warmer water temperatures also threaten the development of young salmon. They can’t survive in water above a certain temperature. And it’s not just young salmon that are affected by warmer water. Salmon are coldwater fish. So,adults that live in the ocean are being pushed farther north because of warming water. “Massive” salmon die-offs have occurred in water above 71.6 degrees Fahrenheit.

Climate change is also making the oceans more acidic ─ and in turn, this could mean less food for salmon to eat.

But how does climate change make the oceans more acidic?

Ocean acidification is occurring because the oceans absorb carbon dioxide from the atmosphere. As carbon in the atmosphere has increased, the oceans have absorbed more of it. When seawater absorbs carbon dioxide, chemical reactions make the water more acidic. The higher acidity makes it harder for shelled creatures to build their shells. It can even dissolve them if the acidity gets high enough. 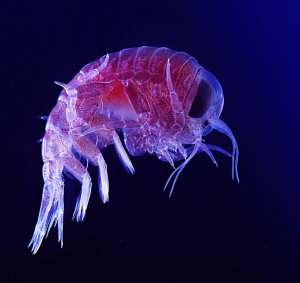 Yes, you’re reading that right! If the ocean gets to a certain level of acidity, shelled creatures will dissolve. Now, that’s a big enough problem on its own, but why does it matter for salmon?

Because salmon eat plankton, and many plankton are shelled. Adult salmon eat a wide variety of foods, but plankton makes up a big part of the diet of juvenile salmon.

Pretty much anything that you can do to help fight climate change will help salmon. Some of the most impactful things you can do are to drive less and use less energy in your home. You can also eat less meat and stop using single-use plastics.

There are tons of resources that can help you find ways to have less of an impact on the planet and the oceans. Try googling “how to reduce my carbon footprint” and you’ll find endless websites with plenty of ideas. Also, consider emailing your representatives to tell them that climate change needs to be a priority.

If you’re looking for other ideas, warmed up the fastest (they DO help!) or donating to organizations that fight climate change. You can also check out one of our past blogs about simple ways to protect the oceans.

Of course, salmon need food for their day-to-day energy. Their migration to spawn can be hundreds of miles. Swimming that far requires a ton of energy. So a dwindling food supply is a huge threat.

Warmer temperatures have also led to more outbreaks of diseases and parasites that can kill salmon. One toxic algae bloom killed millions of farmed salmon in Norway. Scientists believe it happened because of warmer, more acidic water.

It turns out that algae loves carbon dioxide ─ it needs it to survive. So more carbon dioxide = more algae. Not all algae is bad, but some forms are harmful to animals and people, and can create dead zones in bodies of water.

Other environmental threats to salmon 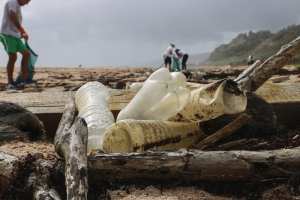 Salmon have been remarkably resilient, considering the challenges they’ve faced for decades. Humans have been making life harder for salmon for a long time. Add in climate change, and you can see why many types of salmon are struggling.

Dams, mining, and other industrial activities have been destroying salmon habitats for a long time. In fact, in some rivers, humans have had to intervene for decades to help salmon survive. 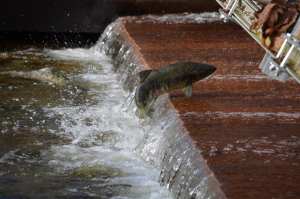 Things like “fish ladders” have been put in over dams to help salmon and other migrating fish make it over man-made obstacles in rivers.

Logging is another problem, because it can leave rivers with less of the natural “debris” that young salmon use as shelter. And runoff from both cities and farms brings all kinds of chemical pollutants into the water. Some of these can quickly kill some types of salmon. 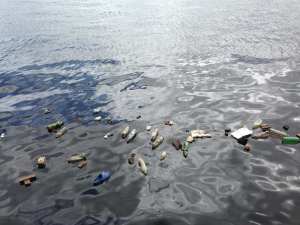 Plastic pollution is a well-documented problem in our oceans. Microplastics harm fish that eat them, and then end up in our food supply when we eat fish that have eaten the plastics.

According to a Mother Jones article, it’s estimated that Americans eat “at least 74,000 pieces of microplastic a year.” The scariest part is that we don’t know the possible long-term health effects of eating so much plastic.

The same article goes on to describe how plastics harm fish. It can build up and block their intestines. Sharp pieces can puncture their organs. And it can fill their stomachs so that they don’t eat enough actual food. It can also affect their hunting and can cause growth problems in offspring.

Plastic pollution is an enormous problem that we’ve created for ourselves and other living things.

Why Does It Matter 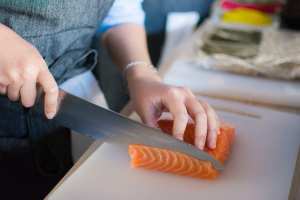 It’s not just bears that depend on salmon. Around the world, salmon is important for so many reasons. Salmon fishing is a business that sustains countless people. Salmon are culturally important to many people. And they’re an inextricable part of ecosystems and food chains.

What’s good for salmon is good for human populations too. You should care about salmon because, either directly or indirectly, the health of salmon can affect you! 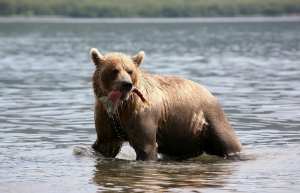 Salmon fishing is a major economic driver in Alaska and the Pacific Northwest. According to NOAA,  salmon fishing was worth $598 million in the United States in 2018.

Take Alaska as an example. During peak season, over 20,000 people are employed in salmon fishing. That’s almost 3% of the total population. Of the monthly average of jobs in the seafood and fishing industry, 60% are in salmon fishing.

“Without salmon returning to our rivers and streams, we would cease to be Indian people.”

Native American tribes in the Pacific Northwest have relied on salmon for thousands of years. And it’s not just an important food source. Salmon is an essential part of the tribes’ culture.

Many tribes believe that when the Creator created people, salmon was a gift from the Creator to help the people survive. In religious ceremonies, salmon are honored for sacrificing themselves to feed people.

Many members of Native American tribes also make a living by fishing for salmon. They use modern fishing techniques and traditional ones as well. Several tribes have banded together to develop a restoration plan to protect the fish that are so fundamental to their culture.

Effects on other species

Remember when you learned about ecosystems as a kid? How all the living things in an ecosystem are connected, and when something affects one species it affects all the others?

Salmon are part of a delicate ecosystem, and if one part of that system gets disrupted, the whole system feels it. Lots of other animals depend on healthy salmon populations for food, both in the ocean and on land.

Whales, bears, seals, otters, and bald eagles are a few of the animals that eat salmon. And of course, salmon eat other animals too. The populations of those animals, like plankton, fly larvae, and crayfish, would be thrown off if there were fewer salmon eating them.

What can I do to help salmon? 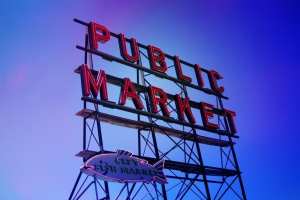 Ok ─ if you’re read this far, then by now you must be thinking “what can I do to help protect salmon?

Pretty much anything that you can do to help fight climate change will help salmon. Some of the most impactful things you can do are to drive less and use less energy in your home. You can also eat less meat and stop using single-use plastics.

There are tons of resources that can help you find ways to have less of an impact on the planet and the oceans. Try googling “how to reduce my carbon footprint” and you’ll find endless websites with plenty of ideas. Also, consider emailing your representatives to tell them that climate change needs to be a priority.

If you’re looking for other ideas, consider beach cleanups (they DO help!) or donating to organizations that fight climate change. You can also check out one of our past blogs about simple ways to protect the oceans.

Nobody wants to be part of the problem. But when you buy seafood that isn’t sustainably fished, you might be contributing to overfishing and other practices that harm salmon.

The Monterey Bay Aquarium’s “Seafood Watch” program is a great resource. It helps you choose sustainable seafood and contributes to healthier oceans. Use this tool while you’re shopping or ordering at a restaurant to find out which types of salmon to buy and which to avoid.

Of course, we at Ocean Blue Project need your support as well. Since 2012, we’ve collected over 180,000 lbs of debris from American beaches. Your donations help us keep cleaning up trash and preventing it from going into the oceans.

Salmon are feeling the effects of climate change, to be sure. It’s not too late to help, but we have to act now. The health of our oceans depends on it!

Author Bio: Laura is a freelance writer focused on the architecture and construction industry, but in her spare time she enjoys blogging for nonprofits to help raise awareness for issues, especially environmental issues. She lives with her husband, dog, and cat, and loves hiking and kayaking.

PrevPrevious5 Powerful Ways to Reduce Your Single-Use Plastic in the New Year
NextIs St. Patrick’s Day Lucky for the Environment?Next